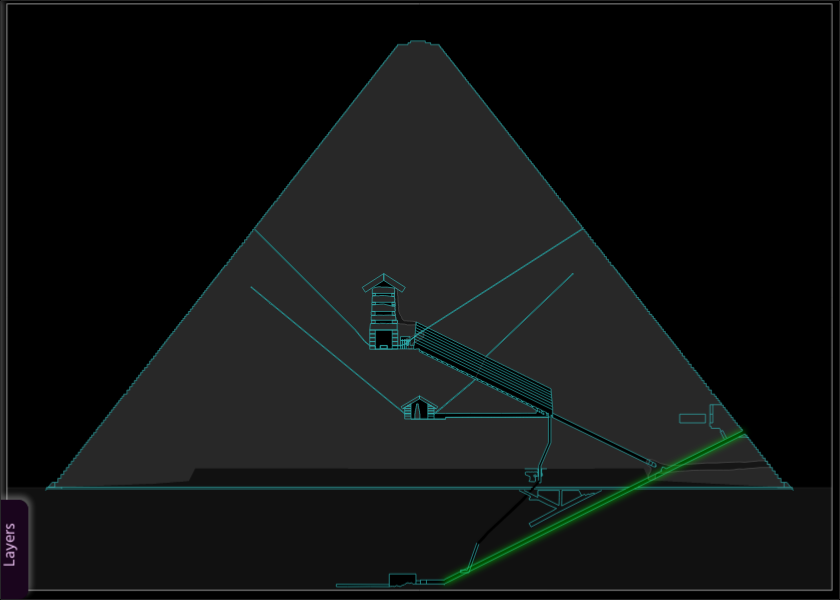 A tour around the pyramid

The Great Pyramid of Giza is a complex architectural structure containing many parts to its design and on this page the areas within the pyramid are identified and named so that as you progress through this website you will understand the different sections of the building that are being referred to.

Click to highlight the faces of the pyramid which are comprised of 201 complete courses of masonry, all of which have been surveyed. They form the outer shell of the building and are all of varying heights with the tallest courses being at the bottom of the pyramid and the smallest towards the top.

The entrance passage runs from the northern face of the building down to the underground chambers. This passage is constructed out of stonework from the entrance to the point where it goes underground, and from here to the bottom of the passage it is entirely quarried out of the bedrock of the Giza plateau. The is no discernible difference in the angle of the passage between the top section which is stonework, and the lower section which is quarrying.

The subterranean chamber has a roughly cut floor area and a passage which continues to a dead end to the south of the chamber.

The well shaft is one of the less regular parts of the pyramid. It descends vertically from the top of the ascending passage area and at ground level opens up into a cave like area known as the 'well'. The shaft is built from stonework from the top down to the bottom of the well, and from this point onwards it is very roughly quarried out of the bedrock of the Giza plateau. The top section of the shaft and the well have been surveyed, but the irregular nature of the bedrock section of the shaft makes it impossible to survey this section, so that although it is connected at its lower end to the entrance passage the connection will always be of an unmeasurable length.

The lower chamber passage runs from the top of the ascending passage in a nearly horizontal manner to the lower chamber of the pyramid. Along its length there is a large step in the passage which drops the floor level down whilst the roof level remains at the same height.

The lower chamber is situated at the end of the lower chamber passage and is a regular room constructed of limestone blocks and has a gabled roof. On the east wall of the chamber there is a large carved recess which is known as the 'niche' and on the north and south walls there is a rectangular hole on each wall which was originally sealed over and which are the start of the lower shafts of the pyramid.

The lower southern shaft was originally hidden behind the south wall of the lower chamber and was opened up in the early 1800s by explorers who chiseled away at the stonework that blocked access to it. It has a 2m long horizontal section to it after which it then is angled and runs for a length of 61.5m. Because the shaft is only 23cm square in cross section it was first explored in the 1990's when technology had progressed to the point where robotic systems could be used. At the end of this shaft a doorway was found which was subsequently drilled through to reveal a 20cm long cavity behind it.

The lower northern shaft is the most unusual section of the pyramid's architecture. It has a 2m long horizontal section and then an angled section which runs until it meets the floor of the gallery. At this point it turns to the west (in to the screen) as it passes behind the gallery, and then once it emerges from behind the gallery it continues at an angle until it reaches its end point. The shaft contains a large variety of objects inside it such as metal rods, a small hook and a stone ball.

The gallery tunnel runs from the upper section of the east wall of the gallery and is roughly carved out of the building's stonework. It connects the top of the gallery to the relieving chambers which are found above the main chamber of the pyramid and this tunnel has allowed archaeologists access to these otherwise inaccessible parts of the building.

The antechamber passage is a horizontal passage that runs from the top of the gallery into the main chamber of the pyramid. At the start of this passage its west wall there is a tunnel which leads through to the area behind the north wall of the antechamber.

The antechamber tunnel is roughly cut from the stonework of the pyramid. It starts from the west wall of the antechamber passages and is a cave like area that is located to the north of the main chamber. The tunnel cuts through the upper northern shaft of the building splitting it into two parts.

The antechamber is a small room which contains the remains of what appears to be a locking mechanism that was designed to prevent entry into the main chamber. There are grooves running down its side walls into which the locking stones would have fitted, but of the four grooves only one of them contains a stone which is cemented into place and split into two pieces which are placed one on top of the other. The other stones which would have fitted into the other three grooves have been found outside the pyramid.

The upper chamber of the building is a finely finished room constructed of granite in which all of the wall stones have been polished and the joints between those stones are precisely crafted. The roof of the room is made up from massive 50 tonne blocks of stone which run from north to south across the room, and the floor is made up of a mosaic of different sized blocks. The room contains a coffin from which the lid is missing.

The relieving chambers are located above the upper chamber of the pyramid and can be accessed via the gallery tunnel. They comprise of four rectangular cavities in which the top of the roof stones that make up the cavity below can be seen. The roof of each of these four cavities is flat and the floor of each cavity (the top of the roof stones below) is uneven. The upper, 5th relieving chamber has a gabled roof.

The relieving chamber roof is a gabled roof which, from an architectural perspective, relieves the stress off the upper chamber below, hence its name. The massive stones from which it is made up are not perfectly set against each other resulting in a small cavity between the north and south sides of the roof. It is because of this cavity that the height of the gabled roof stones has been able to be measured.

The upper southern shaft starts from the main chamber and after an initial 2m long horizontal section is then angled at 45° and rises up to emerge on the south face of the building. It has a cross section similar to the lower shafts of the building, and because of these dimensions it was not investigated until the 1990's when a robotic sensor was dragged up the shaft attached to pulling cables which had been lowered into the shaft from the shaft's exit on the 101st level of masonry on the south face of the pyramid.

The upper northern shaft is more complex than the upper southern one because it is split into two parts by the antechamber tunnel. The shaft has a 2m long horizontal section which starts on the north face of the main chamber after which it starts to incline at an angle of 32.6° which can be seen by looking into the shaft from within the main chamber. From inside the antechamber tunnel the angled section of the shaft that appears to start in the main chamber can be seen on the tunnel's south wall, and on the north wall of the tunnel the shaft then starts again and rises at the same angle to emerge on the 102nd level of masonry on the north face of the pyramid.

The apex of the pyramid does not exist. The upper levels of masonry which would have formed the apex are not present on the building.

The trial passages is the name that has been given to a series of passages that have been carved out of the bedrock of the Giza plateau outside the pyramid. They are located 80m to the East of the pyramid's eastern base line and are a replica of the passages that can be found inside the building, but shortened in length. The only feature in these trial passages that is not present in the pyramid itself is a 'vertical shaft', which in actual fact is not quite vertical.

The lower cavity was recently discovered in 2017 and is a yet unexplored area inside the pyramid that is sealed off without any known entrance to it. It was discovered by measuring charged particles coming from outer space over a period of time of several months and then analysing how the particles were being absorbed by the pyramid's stonework. The lower cavity is situated above the known entrance to the pyramid and behind the face stones on the northern side of the building.

The upper cavity was discovered at the same time as the lower cavity using the same technique. Its precise location is not known with complete certainty nor is its inclination to the horizontal known, but the approximate location and size is shown on the drawing as reported by the technical team who carried out the analysis.

The surveying data of these architectural features can be found in the appendix to this website, available from the main menu.

After that brief and necessary introduction, let's get started. Click the 'forward' button on the page navigation at the top of this text which will open up the main menu where you can start reading the basic section of this work.