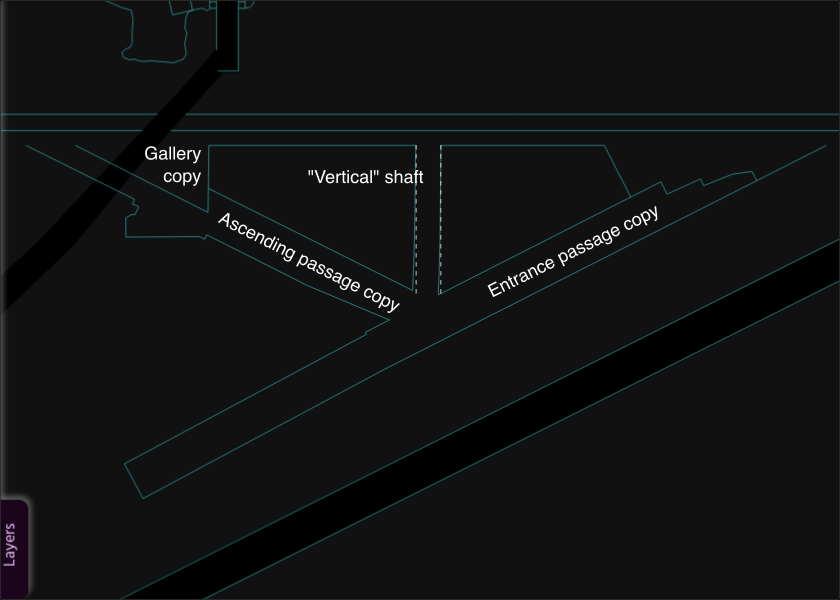 The trial passages are located outside the pyramid about 88m to the east of the eastern face of the building at which point the ground level is a meter or so below the level of the pyramid's base line. The interactive drawing shows a close up of the trial passages, and as the name that has been given to this construction suggest, these passages are a duplicate of the actual passages within the pyramid and are thought to be 'trials' which the builders carried out as a test before they built the main structure.

The features of the pyramid that they are a copy of are marked on the drawing, and of particular note is that the so-called 'vertical' shaft in the middle of the drawing is not in fact vertical as can be seen comparing its side to the vertical white lines that are placed on the drawing. The difference from the vertical is small with the shaft bending away to the left as you drop down it, and this non vertical nature is visible in the original surveying drawings from Petrie from which the interactive drawing was created.

These trail passages are an integral part of the calibration system of the pyramid's geometry and to understand how they have been positioned you need to view them from above the Giza plateau. If you switch to a plan view of the plateau and then zoom in to the north east corner of the Great Pyramid you can see the trial passages on the right of the drawing isolated from the rest of the structures on the plateau.

The positioning of the trial passages is not arbitrary, and if you click here to overlay an explanatory drawing you can see that they are positioned 200 cubits away from the eastern side of the Great Pyramid at exactly 1 radian angle from north (top of the screen). The geometry of this positioning conforms to the angle and distance ratio that was first seen in the gallery and has been used on several occasions, and is therefore deliberate.

To use these 'trial passages' for one of their intended purposes they need to be moved from their constructed position to their geometrically altered position on the east side line of the building, and they will appear on subsequent interactive drawings shown in both their original and moved locations.