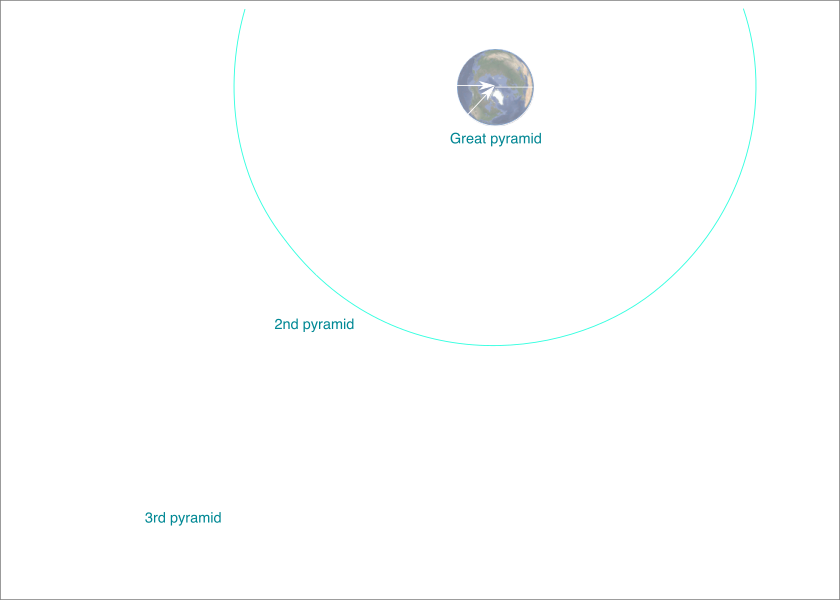 It is essential to get the scale of the Earth model that is being used to form the geometry correct, and this is the only place that the calibration can commence.

The interactive drawing shows a plan view of the Giza plateau. The Great Pyramid is the large upper right building, the second pyramid of Giza is the large middle building and the third pyramid of Giza is the smaller construction at the bottom left. Adjacent to these pyramids can be seen the smaller side pyramids. North is at the top of the screen.

The scale of the model of the Earth that has been used so far in the basic section of the work was derived from Petrie's surveyed average base length of the Great Pyramid of 230.348 m. The premise is that the base length of the pyramid represents half of the circumference of the polar cross section of the Earth, which on the WGS84 reference ellipsoid has a real length of 20,003,931.51066 m and so the scale was calculated for the model as 86,842 : 1.

The second pyramid of Giza

If the Great Pyramid is a model of the Earth and the original premise is to remain intact, then the second pyramid on the Giza plateau must represent an object in very close orbit to the Earth. The real world distance to this object can be calculated because Petrie triangulated the distance from the central vertical axis of the Great Pyramid to that of the second pyramid across numerous station marks and accurately determined this distance as being 486.88 m.

Therefore by scaling up the surveyed distance between the two pyramids by the model scale currently in use it is possible to determine the real world distance between the Earth and whatever the second pyramid represents. Performing this calculation shows that the second pyramid must represent an object in space orbiting the Earth at a radius of 42,281,566 m.

It is very easy to quickly assume that the second pyramid of Giza represents an object in geostationary satellite orbit and that the discrepancy of 1.35m between the scaled orbit calculation and the distance between the buildings is a consequence of surveying inaccuracies. However, this is not the case, and the system needs looking at in more detail to reveal not only the correct scale but also an extra, vital, piece of information.

The physics equation that dictates the radius of geostationary satellite orbit is GMe=dv2 which is arrived at by balancing the gravitational force on an orbiting body with the centripetal force associated with its rotation. The left side of the equation, GMe is the standard gravitational parameter for Earth and is a combination of G, the universal gravitational constant, and Me . It is the definition of the second of these parameters that is essential to understand, because Me is not the mass of the Earth as the lettering suggests,

Me is the mass of the Earth and its atmosphere.

The opening premise of this work is that the Great Pyramid is a geometric model of the Earth, but if we now have an object in orbit around it and we want to calculate distances to this second object, the model of the Earth has to include the atmosphere, otherwise any calculations related to other objects which are external to the Great Pyramid will not conform to the laws of Physics. Consequently the original premise needs adjusting accordingly.

The current standard atmospheric model of the Earth is the ISO 2533 model and the following semi major radius values for an Earth reference ellipsoid which includes the atmosphere can be derived from the values in that document.

The three atmosphere names and values are the naturally occurring temperature boundaries in the atmosphere, and at each boundary the proportion of the Earth's atmospheric mass that is included up to that point is shown. If the mass of the atmosphere needs including in the orbit calculation, then using the radius at sea level or at the Tropopause for the semi major axis of a new reference ellipsoid would not be correct because the mass proportion of the atmosphere up to these levels is not sufficiently large enough to be used. The first available radius for a realistic mass model of the Earth and its atmosphere is at the Stratopause.

The scale calculation for the Earth model which determines the Great Pyramid's architecture is based on Petrie's surveyed base length, and can be recalculated for ellipsoids which include both the Stratopause and the Mesopause. The results of that recalculation are as follows, with the scale rounded off to a 0.02% surveying error margin to produce integer scale values:

Either of these scale values could be used for an atmospheric Earth model because both produce rounded integer values for the scale, and this ambiguity needs to be resolved. The architects' have done exactly that, and in the most refined scientific way imaginable.

Using the two possible scales from the atmosphere boundaries that were calculated above applied to Petrie's surveyed distance between the two pyramids, and plugging the numbers into the physics equation for satellite orbit shown earlier on this page gives the following, (with the surveying error margin of Petrie transfered through the calculation)

For the Stratopause model, the orbital period measured in seconds is equal to the scale of the model, and this is not just numerical coincidence. It is the principal definition behind the architecture of the Great Pyramid of Giza and its associated buildings, and it defines two fundamental constants in one statement - the scale of the model and the fundamental unit of time, locking them together.

This definition is remarkable, but absolutely correct, and as a consequence the definition of the second as the fundamental unit of time must originate from the architecture of the Giza plateau.

The original premise of this work can now be adjusted to a defining statement, and a second can be added which defines the second Pyramid of Giza.