Click here to view the north end of the gallery in detail and if you take a few minutes to study it you can see that the overlaps are not regular at all - some of the them are horizontal and some are angled to the slope of the gallery. The top of the 1st overlap is significantly longer than all of the others, and at the bottom of the 1st overlap the wall continues downwards with no overlap.

Click here to display the analysis of the north end wall. The first thing to note is that the system employed is a repetitive system and the upper 5 overlaps all have the same length, regardless of whether they are horizontal or angled. The architecture of these overlaps is formed in the opposite manner to the south wall, so that the 1/7 cubit length is along the slope rather than horizontal. This means that the horizontal overlaps on the south and north walls are of different lengths, 2.9" on the south wall and 3.2" on the north wall, and this can be clearly seen in the original surveying measurements that were taken by Petrie.

This PDF file shows the analysis of the gallery end walls from the surveying measurements.

Click here to show the non-vertical sections of wall on the lower overlaps. The values show the horizontal offset of the bottom of each overlap compared to the top of that same overlap, and you can see that there is a small 0.1" earthquake movement on the first overlap. The lowest overlap shows the familiar 0.45" horizontal offset to the south which is a deliberate architectural feature, and the earthquake checksum feature is also shown.

The checksum at the bottom of the north wall is ingenious, and has the exactly same format as the checksum of the south wall: it has a west and east side component and is composed of the horizontal length of the overlaps and the horizontal length of the non-vertical wall sections. It is contained in the portion of the ascending passage floor that protrudes into the gallery, which you can zoom in to.

The checksum calculation is both highly accurate and approximate at the same time, and to show this fact in the architecture the end of the ascending passage slope is rough stonework. The interactive drawing shows the side view of this floor section, and the following is a plan view, not drawn to scale so as to illustrate the design system. 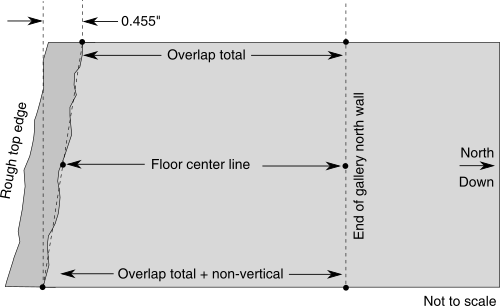 Click here to show the design system on the interactive drawing

The broken off piece of the floor at the top of the slope is based on one of the primitive triangles and therefore the length of the side of this triangle that is along the slope is known perfectly. If you take the length of the floor center line, which is the average of the two checksum calculations, and deduct it from horizontal overlap total along the slope, you get the same length as the triangle side.

These two values have a difference of 0.2 mm, showing that the construction of the north wall has been correctly determined and can be used with confidence in the calibration.