The interactive drawing shows the dynamic construction from the previous pages with all of the formation geometry removed so that the only remaining objects on the screen are the two ellipses, the moving gallery groove line and the perpendicular projection of the Earth on that line. The gearing ratio has been applied to the secondary ellipse so that it is oscillating at half the frequency of the principal ellipse, and the gearing has been applied in the opposite manner as before so that the secondary ellipse's rotation angle is negative and consequently only the left side of the key projection remains.

If you zoom in to the the lower northern shaft area you can see the result of all of the geometric construction that has been assembled inside the pyramid from the first page of this work up to this point.

The 'handle' has now been separated from the key, or 'hook', leaving the left arm of the key as the only part that is being plotted with its perpendicular projection on the gallery floor. The perpendicular projection of the end of the hexagonal rod, which is the dynamic Earth point, is moving up and down the central section of the lower northern shaft, and because of the gearing that has been applied to the geometry which ensures that the astronomy is correct, there is a static section of the plot positioned in the shaft and the dynamic section continues from this point up to the end of this shaft section.

This static plot section, which runs from the top of the hexagonal rod's straight section up to the groove in the gallery when viewed from the east is the square rod that can be found in the lower northern shaft and that was photographed by the robotics engineering team: 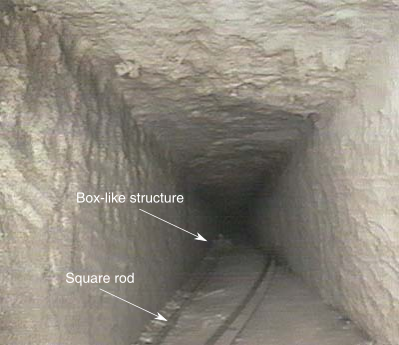 Please visit the Upuaut project for the original image.

The left side of the key plot

On first appearance it looks like the whole of the construction of the pyramid, except for the main chamber, has been solved but this is not the case. If you zoom in on the plot of the left arm of the key, and let the plot develop, you can see that the blue and yellow plot lines do not follow the same path. Although the difference is only small, it cannot be correct astronomically because it would result in the Earth's velocity relative to the Sun being different on its return from the Aphelion position back to Perihelion than it was on the way out.

The only possible solution is that the principal ellipse must be based on another model of the Earth which is missing from the construction at this stage.