The interactive drawing shows a plan view of the Giza plateau and if you zoom in to the Great Pyramid you can see to the east (right) of it and aligned with the central axis of the pyramid is what is known as 'the pyramid temple'. If you zoom in further to show the the pyramid temple with its dimension superimposed you can see that its architecture is formed from the dimensions of the secondary master ellipse which is shown as a grey circle - because it is being viewed from above the north pole and its cross section is therefore circular and not elliptical.

The temple of the Great Pyramid is architecturally designed from the master secondary ellipse and is a plan view of the Earth. The following is a photograph of the temple area 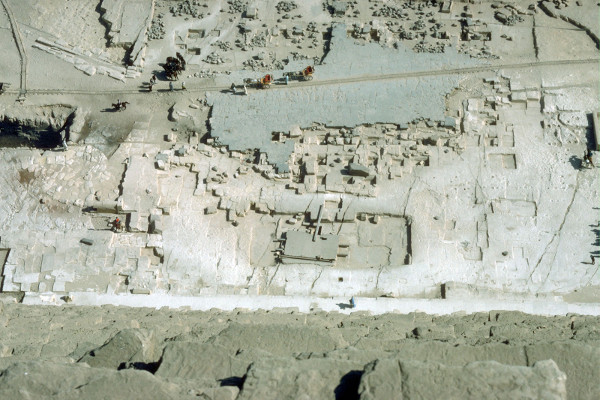 As you can see from the photograph the temple does not exist, only the foundation imprint that remains in the bedrock, and the reason for this is not that the temple has been destroyed by earthquakes or that its stones have be plundered by locals over the centuries which are the accepted explanations. The object that the temple represents, the secondary scaled model of the Earth, is located 22.274 m above it and the imprint on the ground is a projection of the Earth's geometry.