To understand the rest of the antechamber it is necessary to understand in detail how to apply the Z-axis rotation to the dynamic geometry system, and this starts with a understanding of the astronomy principals behind the rotation.

The fundamental parameter required to start the Z-axis rotation is a specific moment in time, or epoch, from which all of the calculations can be performed. The current epoch used by astronomers is called J2000 and is defined as 12.00 hrs UTC on 1st January of the year 2000, but the astronomy within the pyramid must have its own defined epoch.

When mapping out objects on the Earth, north is used as a reference direction and without this as a starting concept it would be impossible to state latitudes and longitudes or the position of anywhere on the planet. In astronomy the problem is that there is no north and so, as a convention, astronomers use the direction of the vernal equinox (northern hemisphere) as a starting point when specifying astronomical parameters. This reference direction is shown on the illustration below 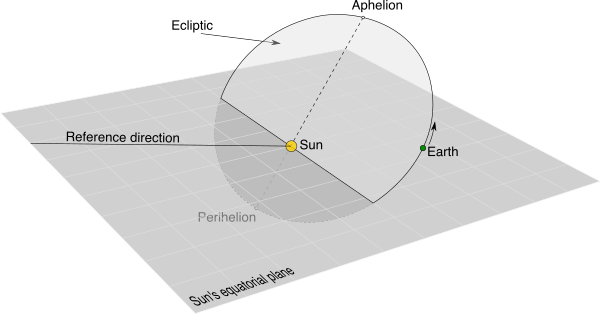 It is drawn on the equatorial plane of the Sun in the drawing and is defined as the direction in which the Earth's pole was pointing on a specific equinox date.

Orientation of the Ecliptic

The next parameter that needs to be determined is the orientation of the Ecliptic, which changes over time. The way that is done is by specifying the point, or node, on the Earth's orbit when the planet emerges from being below the Sun's equatorial plane and moves to being above the Sun's equatorial plane. The position of this node is then recorded as an angle relative to the reference direction that was determined above. Because this is similar to the way longitude is determined, astronomers have called this value the 'longitude of the ascending node' and it is shown on the illustration below. 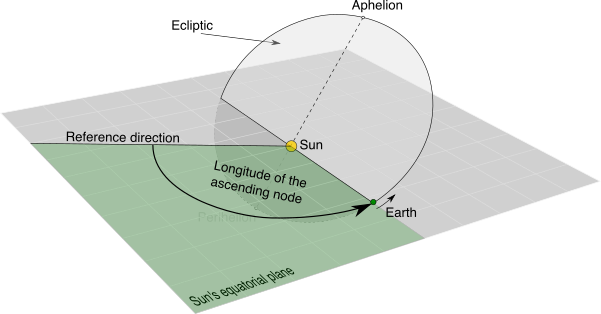 Rotation of the Ecliptic

The final parameter that is required is one that describes the rotation of the Ecliptic which also changes over time. The convention that is used to specify this is to start from the ascending node line, as defined above, and measure the angle to the point of Perihelion in the Earth's orbit. This is shown on the illustration below and is known to astronomers as the 'argument of Perihelion' when used in reference with the Sun as the central body of the orbit. 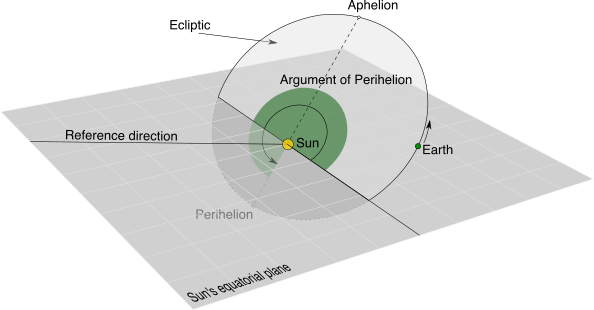