In the advanced section of this work the hidden structure of the pyramid that is formed from the master ellipse in the lower chamber was identified and was shown to match the internal voids that have been measured by the Scan Pyramids project team.

To gain entrance to this unexplored part of the pyramid you need to identify its concealed entrance, and this can be done by looking through all of the work so far and looking for any details within the architecture that have yet to be used in the solution.

In the intermediate section of this work the door at the top end of the lower southern shaft, 'door 221', was studied in detail and the photograph of its lower face is reproduced below.

The two different sized circles on the metal 'handles' now make sense because they represent Earth at Aphelion and Perihelion as a small and a larger circle but the rest of the features on the door have yet to be identified. Of particular interest is the faint straight line because, if you compare it to the northern tangent line on the interactive drawing you can see that it is of the same angle. By using this line as a guide, the door can be placed on the interactive drawing so that the ellipse of the Earth and the door itself are of the same size, which can be done by clicking here .

You can now see why one of the metal handles was 'broken off', because with the Earth set at its natural axial tilt and at equinox, the two handles mark out the angle of the axial tilt of the Earth. This leaves the broken bottom right corner of the door as the only feature left to be explained and you can see on the interactive drawing that it coincides with the discontinuous section of the pyramid's architecture where the 'plug blocks' are situated. 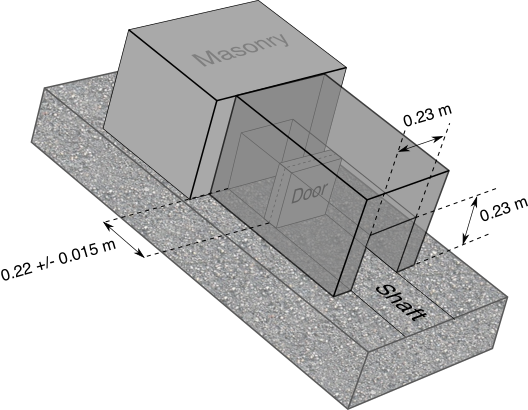 An illustration of the face of the plug block based on a photograph taken from inside the entrance passage is shown below. 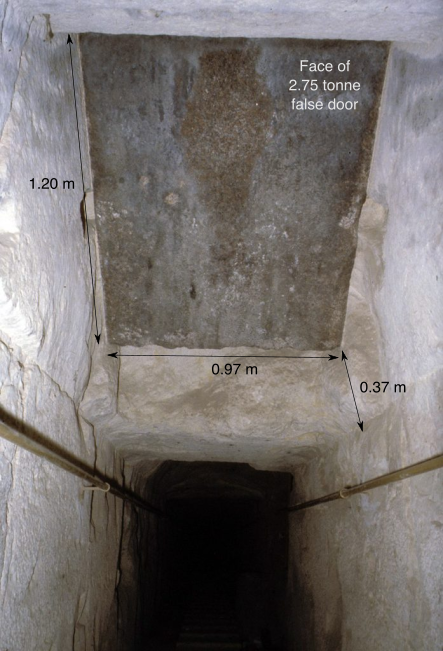 The mass of the false door

To confirm that these two constructions are designed to mimic each other the dimensions of the lower plug block door can to be calculated. From Petrie's surveying measurements the width and height of the door are 38.2" and 47.26" respectively, or 0.97 m by 1.20 m. The height of the door of the lower southern shaft is known from the dynamic geometry as being 0.193 m and so the height of the door of this shaft is exactly 5 times smaller than the plug block's height (the proportion being deliberately the same as the principal ellipse's size to the secondary ellipse). The thickness of the door does not need to be calculated because it is clearly given in the architecture by the indentation of the face of the plug block into the passage, a distance of 0.37 m as shown on the interactive drawing.

The volume of the door can then be calculated in cubits as follows :

The volume of the false door is exactly 3 cubic cubits and because it is known to be constructed from granite its mass can be calculated as being 2.75 metric tonnes. The reason that the false door's volume has been made an exact number of cubic cubits by the architects is so that it is obvious that its volume is an intentional feature, that the door's mass can be calculated and therefore it will be obvious that the door can be opened - by pushing it upwards until its 2.75 metric tonne mass becomes displaced and the door falls down into a cavity to the south of the passage as shown on this illustration.

Once this false door has been removed, it is most likely that the vertical shaft that appears in the trial passages, which are a duplicate of this section of the pyramid, will reveal itself and allow access to the hidden areas of the pyramid. 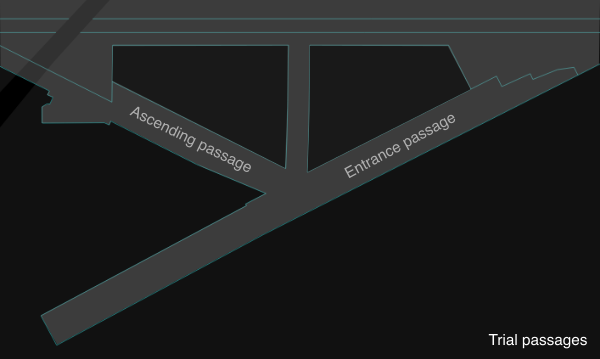 It will be worth remembering the statement that is made at the end of the intermediate section of this work when opening up this false door. We know that the architects of the pyramid must be highly technologically advanced, and they know that if we have got to the point here we recognise their architectural design, then we also must be technologically advanced to the level where we can reproduce their work.

The style of the architecture could therefore be substantially different behind this door.