The reverse engineering of the Great Pyramid's architecture took around 40,000 hours and if you are wondering why it took so long then you are in good company, because I also wanted to understand why the work had been so time consuming. The answer to this gives another valuable insight into the design system of the pyramid, and to understand it the subject of reverse engineering needs to be considered. 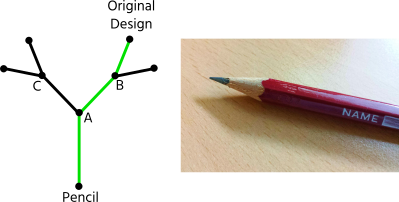 There are several nodes in the diagram where conclusive solutions to engineering questions are answered and it is by investigating and answering the node questions that the original starting point of the design can be reached. The node questions in this example are

The answers to the node questions are that A) the graphite could not have been a liquid that was poured into the hole in the wood, and B) the solid graphite could not have been inserted into a hole in the wood. Therefore the original design of the pencil must have been two piece of wood glued together with a graphite cylinder placed between them. The question at node C did not need investigating because the answer at node A ruled it out.

If the same method of analysis is applied to the Great Pyramid, then the following simplified illustration shows logic flow

The options of the node questions in the diagram are

The architecture is deliberately designed to incorporate geometry from all of the node options, so that when you are attempting to reverse engineer the pyramid and get to node A you have to use both options in the solution. This means that node B then has to be duplicated on both sides of the tree and this node also has both options in use, meaning that node C needs to be duplicated on both sides. This system carries on all the way through the pyramid's architecture and makes the reverse engineering as difficult as possible to accomplish - by design.

When the reverse engineering is started it is focused on the upper northern shaft of the building which can be solved relatively quickly but, as the illustration shows, the solution is effectively a dead end which deliberately establishes a number of parameters all of which provide no path to the master design.

The only way to get from the correct diagnosis of the upper northern shaft to the master design is by undoing the work that you have just done and starting again from node A. And if there's one thing that we human beings do not like doing it is discovering something and then starting all over again, because the natural tendency is to progress forwards from where we have got to. The option that the solution may involve going backwards is counter intuitive.

The pyramid's architectural design is a masterpiece of engineering, science, logic and psychology.